Chatam Sofer, with his own name Moshe Schreiber (1762-1839), was a renowned Orthodox rabbi and scholar. He was born in Frankfurt am Main, served as a rabbi in Prostejov and Mattersdorf in Burgenland. The most important period of his rabbinate is related to Pressburg, today Bratislava. He was a leader of a traditionalist response to changes brought to the Jewish society in the 19th century. The strictly Orthodox rabbi led a yeshiva in Bratislava, considered to be one of most prominent centers of traditional Jewish learning in Europe.

The cemetery’s history dates back to the 17th century, when the Palffy’s allowed their Jewish subjects to establish a cemetery in an area between the castle cliff and the Danube River. The teaching of Judaism obliges to leave the remains of dead intact until the coming of Messiah. Tombs at Jewish cemeteries are purchased from the Jewish community and remain a permanent family property. Old cemeteries should be protected as well.

The cemetery on the bank of the Danube had been perfectly preserved though not in use from 1847. In 1943 its liquidation had been ordered because of the construction of a tunnel and the regulation of the embankment. A majority of its graves has been exhumed and reburied at the nearby New Orthodox cemetery. Only a Chatam Sofer’s tomb and other 22 nearby graves have been preserved and encircled into a concrete shell covered with concrete panels. For more than half century Chatam Sofer had been resting in a humid and dark chamber, over which, during 1980s, a tramline was constructed. 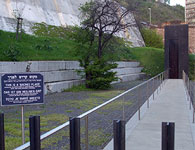 Nevertheless, Chatam Sofer’s tomb had been a frequent destination of the Orthodox pilgrims from all around the world. In late 1990’s, the Jewish Community of Bratislava decided to completely restore the whole premises.

This architecturally remarkable memorial is a dignified place of last rest of renowned Jewish scholars and an attractive monument of Bratislava’s Jewish heritage. The cultivated solution reveals the architect’s deep respect for Jewish tradition and his understanding of the importance of this place.

The Chatam Sofer Memorial is not a museum, it is a Jewish funerary shrine and place of religious worship. Visitors to this monument are kindly advised to arrange their visit to the site by prior contact with the Jewish Community in Bratislava.