For current pictures from Eastern Slovakia browse our list of webcams by regions: >>

The largest Gothic building in Slovakia. Its construction began in 1380 and there are opinions that it is still not finished.

This church is a symbol of Kosice, the second largest Slovak city, metropolis of Eastern Slovakia.

The first written mention about Kosice is from 1230 and Kosice were known during history as Villa Cassa, Cassovia (Latin), Kaschau (German), Kassa (Hungarian), and Kosice (Slovak).

In the medieval times Kosice were the second largest city of the Kingdom of Hungary.

The center of Kosice is very pleasant area with its Cathedral, Urban Tower belfry and Singing Fountain in front of old theater building.

1. The cathedral and the Urban's Tower. 2. A view from Hlavna Ulica St.

A view of the cathedral from Srobarova Ulica St.

Not all towns in Slovakia are evenly rich in historical sights. The most numberous and precious ones are in the region of Spis. The town of Levoca represents the most valuable objects of municipal type in our cultural history. The citizen architecture has been developed here to such visual excellence that it represents the peak of the Renaissance in Slovakia.

Together with the original ground plan of the main square it was reason for Levoca being proclaimed the town historical reserve. The most valuable historical buildings are the town hall, the belfry, the town walls, the opprobium cage, the representative Thurzo's house, and the Renaissance houses with porticoes. From the church architecture the most precious is the St. James Church where unusually valuable Gothic and Renaissance inner furnishings, wall paintings and the altar - Master Paul's masterpiece - have been preserved.

One of the largest ensembles of 13th- and 14th-century military, political and religious buildings in the Central Europe. The oldest parts are from the 11th century. The castle was burned down in 1780. Now it is the national culture preserve. The castle and its associated cultural monuments were inscribed on UNESCO World heritage list in 1993.

A typical village below Belianske Tatry. It was founded in the 17th century when the "gorals" have been settled there. Original wooden houses with closed yards and typical coloured ornaments. Rich in folk art, colourful folk costumes. You can visit ethnographic museum Zdiarsky dom.

Crossing the mountain ridge of Spisska Magura you will see a nature gem, the mutual mountains of Slovaks and Polish - Pieniny. Because of their exceptional botanic values the mountains are the National Park. The instructive path built by the National Park Administration acquaints the visitors with interesting places on this territory. The mountains Pieniny are so interesting and picturesque because of the river Dunajec flowing between bizarre rocks and creating a pass in the massive of Three Crowns. The river Dunajec is very popular among watermen. It is possible to choose between traditional rafting and whitewater rafting. Water transport was very important in past centuries in Slovakia. On Slovakian rivers, rafts of various kinds were in use.

And what are the mountains also precious for? It is the region with the clearest air in Slovakia.

The most valuable from the historical viewpoint is the museum in the town of Cerveny Klastor. The original building of Carthusian monks monastery was reconstructed after World War II and now it is a national historical sight.

Nearly all visitors to this region come and see the spa town Vysne Ruzbachy. Nine mineral springs cure nerve diseases. The thermal swimming-pool was in the year of its opening the largest strand pool in Slovakia. The thermal spring Krater is a rarity.

Situated in the north-eastern part of Slovakia, on the southern hill-side of the Low Beskydy's foothills. It is one of the spas in Slovakia with the most sophisticated equipment. There are 8 precious mineral springs. The curative properties of the mineral water and therapeutically effective climatic conditions enable the treatment of digestive tract and non-specific upper respiratory tract diseases.

Wooden churches are part of Slovakia`s cache of cultural heritage. Slovakia s natural conditions with the huge Western Carpathians Mountains from times immemorial determined the use of wood as the basic and most widespread building material. Naturally, wood was used not only to build simple residential houses and outbuildings, but also magnificent sacral buildings.

The division between the Western and Eastern Carpathians was characterised by a direct contact and influence of both wester Roman and Byzantine cultures. These cultures mixed and the special Boiko-style sacral architecture - wooden churches of the Lemko form were built. Such churches were built in the 17th, but mostly 18th century in northeastern Slovakia, southeastern Poland and western Ukraine. There are many painted icons in these churches, known as tserkvas.(Rifgt: Mother of God Hodegetria, Church of Evangelist St. Luke, Krive, Left: Church of St. Paraskeva from Nova Polianka)

(From the book Wooden Churches - Cultural Heritage of Slovakia.) 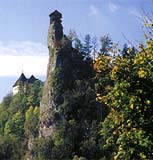 Places of Tourism and Relax in Slovakia