Ruins of the Pottenburg Castle and the Royal View

Ruins of the Pottenburg Castle

On the hill between Wolfsthal and Berg there are the ruins of the former fortress Pottenburg (260 m). This interesting castle is almost unknown in Bratislava, although Iron Curtain is so far now. It takes only 10 minutes by car from the center of Bratislava to achive the Pottenburg hill. But take care - the border check point is on the way.

Since 1519 the fort was not settled and later, after raids of Turks, was completely destroyed.

This tower is visible from Bratislava.

A risky ladder to the tower.

Dark stairs in the Pottenburg tower.

A ladder to the Pottenburg enclosure. Cycling is forbidden.

After seeing the ruins, go back to the road, which ascends up the valley and in its upper part the road turns right. You will soon reach the asphalt road running on the forested mountain ridge. Turn right again and you will comfortably reach the top of the Koenigswarte Mt. (344 m). The watchtower on its top, (called Royal View), provides a wonderful view of Bratislava lying nearby.

More information about The Royal View.

It is very easy to meet a big wild boar in the area of the Pottenburg castle. Go there on your own risk. 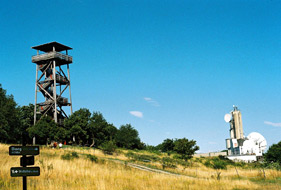